This article focuses on Gas Detection In Confined Spaces – the risks of entering and working in confined spaces and specifically those associated with oxygen depletion/enrichment and/or toxic and flammable gases. The aim is to educate people about the risks, understand the dangers and look at what measures can be taken to monitor and provide gas detection when working in confined working spaces.

Just last week another news article reported that two men had been seriously injured whilst working in a man hole. On entry, both men were exposed to toxic gas, one collapsed almost immediately and the other tried to escape but lost consciousness and fell causing serious injury.

The news article reported that one man was making a recovery but, “it did not look good for the other.”

Some people are oblivious to some of the risks as they can’t see the danger. Unlike working at height where the risk is blatantly obvious, toxic and flammable gases can be an “invisible killer.”

Guidelines and legislation are in place to help protect those exposed to the risk and it is the employers responsibility to carry out risk assessment and implement safe systems of work to protect their employees.

However, it is sometimes people’s attitudes towards safety and a lack of understanding about the gas risks which cause the majority of accidents.

There are many articles about poor working practices and poor attitudes towards the real hazards associated with the lack of gas detection in confined spaces, people who think because they have worked in the same confined space a hundred times, there is no need to carry out pre-entry checks.

People who have felt sick and dizzy so left the confined space until they felt better and then returned.

These problems exists in all countries and some may have a far better or worse approach to safety. It would be interesting to hear views from anyone else who has an interest in this topic.

What Is A Confined Space?

HSE definition: A confined space is a place which is substantially enclosed (though not always entirely), and where serious injury can occur from hazardous substances or conditions within the space or nearby (e.g. lack of oxygen). Some common and not so common examples are listed below:

A confined space does not necessarily mean a fully enclosed area. Ducts, culverts, tunnels, boreholes, bored piles, manholes, shafts and excavations can all be considered as confined spaces.

Other hazards may be a concern but those listed are specific to working in confined spaces. I will now go on the explore the first three in more detail.

It is essential to regularly check that confined spaces are free from both toxic and flammable gas and vapours where risk assessment indicates that conditions may be subject change. The stratospheric gases to be monitored are Methane (CH4), Carbon Monoxide (CO) and Hydrogen Sulfide (H2S) each of these gases can be found at different levels due to their density.

A flammable gas is defined as a gas whose temperature and pressure make it flammable when air touches it at 12% by volume. Some common examples include Methane, Hydrogen, Propane and Butane.

Methane is particularly common in the petrochemical industry whilst Hydrogen is probably considered the most dangerous.

Flammable gases cause a serious risk of fire and/or explosion.

Flammable gases are produced in many industrial process, some examples of which include:-

When dealing with flammable gases it is important to understand the terminology used. LEL and UEL are both frequently referred to and mean:-

LEL: Lower Explosion Limit. This is the lowest concentration at which a gas can be ignited.

UEL: Upper Explosion Limit. The highest concentration at which a gas can be ignited.

The 3 ingredients for a fire

Flammable gases can be present but will never ignite without two other ingredients. Air (oxygen) and a spark/flame must be present to complete the triangle and create the explosion. It is sometimes the case that a gas concentration is purposely kept above its UEL.

At this point there is not enough air (oxygen) in the environment to create an explosion.

The following video from YouTube demonstrates the dangers very well. If clothes become soaked in oxygen you could be in serious trouble. See what happens to the stick man at the end of the video.

The Health And Safety Executive

A toxic gas is one which is poisonous and capable of causing illness, reduced quality of life or even death. They are present and can pose a risk in many industries. Some of the more common gases include carbon monoxide (CO), hydrogen sulphide (H2S) and chlorine (CI2) all of which can be very harmful even at low levels of exposure.

In confined spaces, toxic gases and fumes may be caused as a result of the previous process or previous storage. Gases can also enter from adjacent plant that has not been isolated correctly.

The type of work activity may also create toxic gases, for example spray painting, welding and flame cutting. Although diesel generators should never be used inside confined spaces, a recent incident occurred whereby carbon monoxide fumes from a nearby diesel generator entered a trench where men were repairing underground cables.

Fortunately the men were wearing portable gas detectors and were alerted to the danger.

In the UK, the health and safety executive stipulate work place exposure limits (WEL) for a number of toxic substances. These are occupational exposure limits averaged over:-

The limits set are usually time weighted averages (TWA) and are usually defined in parts per million. PPM. In the USA, Occupational Safety and Health Administration use a similar system to define permissible exposure limits. (PELs)

As an example it states the LTEL for Acetone is 500PPM and the STEL is 1500PPM. In contrast, Hydrogen Sulphide is considered extremely toxic and will cause nausea and headaches to those people exposed to levels between 2-5PPM.

It must be said that the WELs are not a definitive line of what is deemed safe and unsafe levels but there to provide guidelines to be used in conjunction with COSHH.

Toxic gas detectors are used to monitor the concentration of gas in PPM and alert the worker to the danger. The STEL and LTEL can be used to determine the alarm threshold levels. (more on this later)

Oxygen enrichment is indeed a hazard however the more obvious hazard is oxygen deficiency. As can be seen from the table, the “safe zone” is somewhere between 19.5% – 23%. There is some debate over the exact figures but in truth I’m not a doctor or an expert on the respiratory systems so can’t give a conclusive argument.

For those interested, you may wish to read:- Confined Spaces – Is 19.5% oxygen really safe?

So what causes Oxygen depletion? Our friends at Crowcon gas detectors offer the following explanation:-

Exposure to low levels of oxygen can cause giddiness, confusion, poor coordination, sickness, loss of consciousness and death. Without the use of correct monitoring and sampling methods, there are no warning signs of oxygen depletion.  Breathing one or two breaths of air containing oxygen levels below 10% can cause immediate loss of consciousness.

However, we all know there are hundreds of work activities that must be carried out in a confined space. Monitoring the atmosphere with gas detection equipment should always be part of any safe system of work for confined spaces.

Testing The Atmosphere For The Presence Of Gas Hazards

Before workers enter a confined space, the air should be tested from the outside. This can be done by lowering a portable gas detector, such as Crowcon T4, into the work area. Alternatively, a tube can be fed into the area and a sample can be drawn using a pumped gas detector.

Some gases are lighter or heavier than air and therefore it may be necessary to take samples from different heights within the confined space.

Testing should be carried out every time the area is re-entered to check there have been no changes to the atmosphere.

Continuous monitoring should also be carried out whilst workers remain in the area.

Portable gas detectors can be used to sample and monitor confined spaces and instruments are available to detect a single gas or multiple gases.

The Crowcon clip is a single gas detector and can be used to detect Hydrogen Sulphide, Carbon Monoxide and Oxygen. This is a simple device which will activate an alarm in the event the target gas exceeds the set point.

More sophisticated detectors such as the Crowcon Gas-Pro can be used to monitor up to 5 different gases and  record various gas levels and allow for data logging which can be downloaded at a later date.

The choice of gas detector will depend on what gases/vapours have been identified as a potential risk.

When measuring flammable gases a detector usually measures the gas as a % of its lower explosion limit (LEL). When measuring toxic gases, the unit of measurement is normally PPM (parts per million).

The sensitivity of the gas detectors is normally factory set.

Regular bump testing should be carried out to ensure the detector is working correctly and the sensors have not been poisoned or contaminated. Full calibration should always  be carried out as per manufacturers recommendations.

In this case you should detect whichever poses the greatest risk.

For example, Hydrogen Sulphide is a flammable gas in high concentrations but the toxic risk is much greater even at very small exposure levels. Testing should always be carried out by a competent person.

Detecting toxic and flammable gases requires the detectors to be classified and certified according to the specific IECEx or ATEX standard – we distribute flame and fire detectors manufactured by Spectrex to operate in the harshest environmental conditions including self-contained stand-alone devices designed for direct connection to control and alarm systems or automatic fire extinguishing systems. 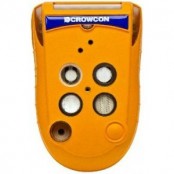