A Series of Articles to educate and inform those involved in the Hazardous Area & Explosive Atmosphere industries.

This Article is number 3 of 8 in the ATEX Safety & Explosive Atmospheres series.

Also in association with INBUREX Consulting.

appropriate explosion protection solutions to industry with full back up services. With 42 years of experience providing Explosion Hazard Services to the process industry, ATEX Explosion Hazards Ltd have a wide range of expertise within their group of companies.

This is the third in a series of eight articles, which aim to help you establish a simple basis of safety in your plant and dispel some of the myths associated with process and safety risk assessments.

The dangers of siting electrical apparatus in areas where explosive mixtures of gases and air could occur were first recognised in the mining industry early in the 20th Century. The chemical and petrochemical industries recognised that, unlike coalmining, the occurrence of flammable atmospheres was due to mechanical and process failures or deliberate situations created by man.

This newspaper article covers a widespread n-Hexane vapour explosion through a drainage system, although reporters referred to is as a ‘gas’ explosion.

A fairly simple set of rules was developed dividing areas where flammable atmospheres could occur into 3 areas of risk, based upon frequency and persistence.  This approach was taken up nationally and appeared in a British Standard Code in 1959. Today hazardous area classification (HAC) covering natural gas installations, solvent handling, oil pumping, etc. is a statutory requirement throughout EU Member States and under the Dangerous Substances & Explosive Atmosphere Regulations 2002 (in the UK), in particular. The zone definitions are as follows:

A place in which an explosive atmosphere (from gas, vapour, mist or spray) is present continuously or for long periods or frequently – e.g. solvent storage tank operating continuously above the ash point of the liquid, etc

A place in which an explosive atmosphere (from gas, vapour, mist or spray) is likely to occur in normal operation occasionally – e.g. sampling point where the liquid is above its ash point temperature, etc.

Zone 2, within hazardous area classification, is a place in which an explosive atmosphere (from gas, vapour, mist or spray) is not likely to occur in normal operation but, if it does occur, will persist for a short period only – e.g. leakage from gas pipework flanges, fittings, etc. Key parameters to be considered include liquid ash point, gas or vapour density, the leak or emission rate, the prevailing level of ventilation (natural or forced), pressure, temperature, LEL, height of release, etc. Oddly, historically, the HAC job was often given to electrical or instrument personnel when it was (and still is) a matter for process engineering!

A place in which an explosive atmosphere in the form of a cloud of combustible dust in air is present continuously or for long periods or frequently – e.g. inside cyclones, hoppers, containers, pipework, etc.

A place in which an explosive atmosphere in the form of a cloud of combustible dust in air is not likely to occur in normal operation but, if it does occur, will persist for a short period only – e.g. outlets from cyclones, clean-side of dust filters, etc.

Historically, the following probability values have been used for guidance (with gases/vapours) and these are commonly applied to solids handling also.

The relevant code of practice for Gas Installations with working pressures up to 2.0 bar.g is IGEM/UP/16 Comm. 1756.

Essentially, the use of effective and appropriate ventilation is the key to precluding hazardous areas in Boiler Houses, battery charging areas, etc. other than Zone 2 (NE) i.e. of negligible extent. Flammable vapour atmospheres will arise when liquids are handled or processed above their ash point temperature.

A 5K safety margin is normally applied for pure materials (solvents) when using ash point temperatures to dene whether or not flammable vapour-air mixtures will be formed. A larger 15K safety factor is recommended, however, for liquid/liquid or liquid/solid mixtures. For spillages, the open cup ash point (rather than close cup) value is more appropriate. The above discussion relates vapour pressure to temperature and in essence, assumes ‘saturated vapour-liquid equilibrium’. Care is needed with operations which produce high shear forces on a fluid, resulting in ‘non-equilibrium’ conditions e.g. high speed mixing, splash loading, etc.

Similarly, flammable atmospheres can arise through mist or spray formation (by mechanical means or condensation). Fine mists can form flammable mixtures well below (may be 200K or more) the ash point of the liquid. The potential hazard arises from leakage of fluids under pressure, from compressions joints, oil seals, etc. The use of flange-guards can eliminate the hazard, however.

In the case of dusts, most sources of release in normal operation should be small, and should be controlled at source, since the increasing concern to reduce occupational health risks from breathing in airborne material should have reduced the number of areas where dust is released regularly into the general atmosphere.

With regard to the extent of a hazardous area (Zone), this very much depends on how much dust is released and whether it would be released as a heap that settled quickly on the oor or as a large cloud. For instance, a sack that tore as someone picked it up might release (say) 5-10 kg, but most would settle very quickly. However, a Flexible Big-Bag (FIBC) where the tie became loose after lifting might release 500 kg (or more) at high level. Also, a pneumatic transfer line might release a very large amount as a cloud.

Unlike releases involving gases and vapours, there is no simple method available of calculating how far from the source a release of dust of a given quantity with a known pressure behind it will form a dense cloud.

However, it is clear that if the release could produce a dense cloud (say larger than a couple of metres from the source), a means of minimising quantity of dust that could be released and its spread should be sought. Often, the provision of simple plastic or fabric curtains are considered to be helpful.

Equipment which is opened up for cleaning, maintenance, etc. may give rise to explosible dust clouds externally if material held-up on internal ledges, back-sides of doors, etc. is dislodged. To cover this, a ‘generic’ Zone 22 area of 1.0 m extent (to solid floor level) is often proposed. However, since the formation of such hazardous areas is predictable, it is not necessary to provide certified equipment within the hazardous area so formed if the work is done under a STRICT permit system i.e. a safeguard whereby uncertified (unsuitable) equipment within the vicinity has been de-energised and isolated. The hazardous area still remains, however.

Dust extraction is important to limit fugitive emissions and it should be routinely monitored to ensure satisfactory performance. In addition, the level of ventilation should ensure that the dust-air concentration does not routinely exceed 25 % of the lower explosive limit LEL or minimum explosible concentration MEC). The ‘capture velocity’ is also important and this depends on the level of air movement in the region of interest.

Dusts, which are not removed by mechanical extraction ventilation, settle out, at a rate depending on properties such as particle size, into layers or accumulations and account has to be taken of the fact that dilute or small continuous sources of release (in time) may produce a potentially hazardous dust layer.

Risk 1: A primary explosion within a building may raise dust layers into clouds, and cause secondary explosions more damaging than the primary event. Dust layers should always be controlled to reduce this risk.

Risk 2: Dust layers may be ignited by the heat flux from equipment on which the layer rests. The risk is of fire, rather than explosion, and this may be a slow process.

These risks depend on the properties of the dust and the thickness of layers, which is influenced by the nature of the housekeeping. The likelihood of a layer catching re should be controlled by the correct selection of equipment and effective housekeeping.

Arrangements must be made for the display of ‘EX’ signage in appropriate locations. Additional information (wording) can be incorporated to highlight the specific hazard i.e. Explosive Gas/Vapour/Mist Hazard or Explosible Dust Hazard

The next article in this series of eight is entitled: Potential Sources of Ignition.
The aim of these articles is to help you establish a simple basis of safety in your plant and dispel some of the myths associated with process and safety risk assessments.

EXPERTS IN EQUIPMENT FOR EXPLOSIVE ATMOSPHERES

LEADERS IN ATEX INNOVATION TO THE HAZARDOUS AREA INDUSTRIES

Thorne & Derrick are leaders in the development and distribution of Product Innovations that deliver significant improvements to clients plant, people and operational safety in the explosive atmosphere industries.

Your proactive problem solvers experienced in succession planning for the replacement of obsolete, non-conformant and legacy equipment in hazardous areas. 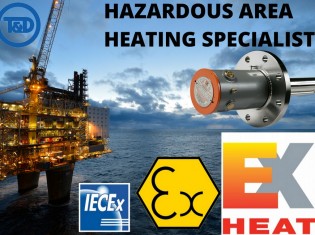